Over the past few months, we've been re-building and digitising our history in an attempt to build an online archive.

The two shows featured in this blog entry represent the foundations of who we are today.

We often look ahead, but actually, it's equally important to glance back, from time to time, to appreciate the past achievements, and the efforts of those who have been involved, members both previous and continuous.

The two shows featured in this blog entry represent the foundations of who we are today. These were our first two shows, The Curse of Miss Fortune (2011) and The Cook Did It! (2012), the latter being our "difficult second album!" as they say.

The Curse of Miss Fortune was what started us off, a single ambition driven by founder Michael Starr. The target was to take a stage play up to the Edinburgh Fringe.

Whilst completing the application form, we were asked to provide a "company name". Crap! After five minutes of blanking, we decided on The Fringe Files, an amalgamation of our two favourite shows of the time, The X Files and Fringe. That'll do! It's just for the application form after all. It's not like we'll use this name beyond Edinburgh (ha!).

The whole project was a life long ambition. There were no plans for a second show, or third... or fourth... That was it!

The Curse of Miss Fortune was, if anything, an epic adventure into the unknown. The Edinburgh Fringe is a tough nut to crack, especially when inexperienced (as we were at the time)... Clearly money was not a motivation either, in fact, we were still paying off the debts two years later. Worth it by the way!

All in all, The Curse of Miss Fortune, with all its challenges played to full houses both in Edinburgh and back home in Bristol. It was a creative success. It was a box ticked, yet most unexpectedly, it started something more... We enjoyed it so much, we decided to keep it going! 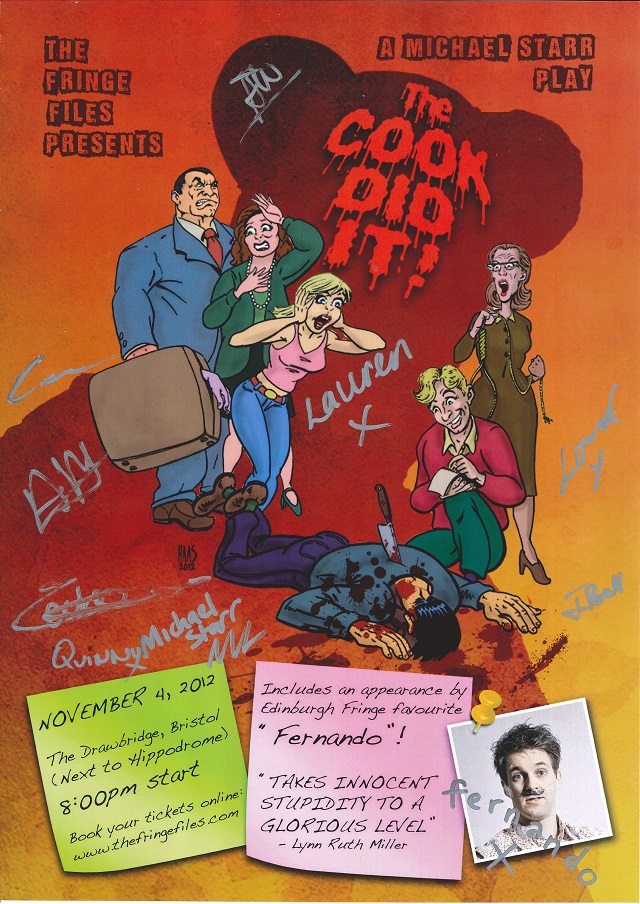 The Cook Did It!, written by Michael Starr, was actually first drafted back in 2009, way before The Curse of Miss Fortune or, indeed, The Fringe Files existed. It seemed like the natural way for the company to go, a comedy play designed for the national festival circuit. The festivals offered an opportunity to perform competitively at a reasonable cost.

Like before, we made mistakes with this production, we overspent on the budget significantly (bad!) and scheduled the performances ineffectively, ending an exciting tour run with a small audience on the first floor of a pub on a Sunday night (silly!). However, it was great fun! The show gained award nominations from the festival and, yes, we lost less money (good!). Technically, that made The Cook Did It! a follow up success, but it could have easily gone the other way.

For us, The Cook Did It! is, without doubt, our most important production. It was our first dip into the festival scene, it was that difficult follow-up production with it's own unique set of challenges.

I read recently (forgive me I cannot recall the source) that 85% of fringe companies fail to make it beyond their first three shows. Crazy eh!

The first show is usually a labour of love, but it's hard work... very very hard work, and expensive too. Many fringe companies stop after one show either because they underestimated the sheer effort that goes into a production, or because they achieve a specific one off goal.

Those fringe companies that continue into their second production face a different set of challenges. Self comparison is one. Statistics tell us that most companies will consider their second show a disappointment when compared to their first. Of course! You can never beat the first one. It was a labour of love, wasn't it? The second production could be far superior in every way, yet it won't matter. In our case, our first play actually was better than the second one. That is our reality, and we were very much following the trend.

From here, a fringe company will go one of two ways, they'll either call it a day there and then, or they'll push into a third production. The third production will generally be different to the second or first production, and again, this is true with us. The first play will be your labour of love, your second play will be an attempt to recreate the first and your third will be re-invention. It's really odd how frequently this happens. I look at other fringe company websites and they often go in different directions on their third production. It's like this weird unknown phenomenon thing in the fringe world.

When I look back, I remember my thoughts as we entered our second production. For us, The Cook Did It! had to succeed, at least on a creative level, a failure would surely have meant the end for The Fringe Files, that's how huge it was, and that's why The Cook Did It!, whilst not our best play, was certainly our most important.

The two posters featured were illustrated by Jeff Haas, with assistance from Arianne Wolodarsky.

Tagged: The Cook Did It The Curse of Miss Fortune Artwork